A Look Back at…Keeping Your Teeth Naturally Healthy 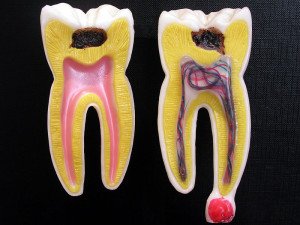 According to the latest CDC statistics, almost all adults have experienced dental caries – 91% to be exact.

“It is not what people are doing wrong,” Dr. Bruce Dye, who led the survey, told Today. “It is maybe what we can do better.”

Well, that’s a way of putting it – and a positive one at that. Yet tooth decay doesn’t happen just because it happens. Some “wrong” things are playing a role – or, at the very least, are doing little to help.

Consider fluoride, which the Today write-up mentions as one intervention that “greatly reduces rates of tooth decay.” Consider that nearly 70% of Americans receive fluoridated water. Consider that in some stores, it is near impossible to find non-fluoridated toothpastes. Fluoride is everywhere.

The upside to that startling statistic is that it may be partly explained by the fact that more of us are keeping more of our natural teeth for a longer time. In fact, the rate of edentulism – having no teeth – has dropped almost 40% over the past 50 years.

But the ideal, of course, is not just to keep all your teeth but to keep them in their naturally healthy condition.

A major help is ditching soft drinks and fruit juices – the two biggest culprits when it comes to enamel erosion, which leaves the teeth more vulnerable to decay. Even better is when that’s part of a move to a simpler, more wholesome diet.

It’s interesting to note that our distant ancestors typically had far less oral disease than we do. For instance, people living during the Middle Ages did have problems like worn down or broken teeth, but as recently discussed in a column on Slate:

Contrary to the depiction of medieval peasants with blackened and rotting teeth, the average person in the Middle Ages had teeth that were in very good condition. This is substantially due to one factor—the rarity of sugar in the diet. Most medieval people simply could not afford sugar, and those who could used it sparingly, usually as a seasoning or minor ingredient and almost never as a condiment or the basis of a dish. This means that most people used natural sugars, such as those in fruits and honey; even then, they ate this kind of sugar sparingly. Taken with a diet high in calcium via dairy, high in vegetables and cereals, and low in foods that cause decay, the average medieval person ate the way most modern dentists would recommend for good teeth.

Not surprisingly, tooth decay was actually much less prevalent in the Middle Ages than it became in later centuries, when mass imports of sugar from the tropics made it a staple rather than a rarity. Surveys of archaeological data from the medieval period show that an average of only 20 percent of teeth show any sign of decay, as opposed to up to 90 percent in some early 20th-century populations.

This is totally in line with what Dr. Weston Price found through his observations of indigenous populations. He found that who ate traditional diets consumed at least four times the minerals and water-soluble vitamins than those who ate industrial diets, and had good orofacial development and good oral health. Once they transitioned to a Western, industrial diet with its white flour and refined sugar, crowded, crooked teeth, caries and other problems soon appeared.