56% of Dentists Say “No” to Fluoridation

The official pro-fluoridation position is unambiguous:

The American Dental Association unreservedly endorses the fluoridation of community water supplies as safe, effective and necessary in preventing tooth decay. This support has been the Association’s position since policy was first adopted in 1950. 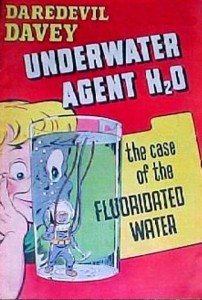 Considering itself to be the voice of dentists as a whole, however, the organization might want to start rethinking their position.

Recently, The Wealthy Dentist – a marketing website for dental practices – conducted a survey that included a very simple question: Do you support water fluoridation?

Overall, 70% said no. Counting only responses from dentists, a clear majority still said no – 56%, to be exact.

Here’s what some of those dentists had to say when asked if they “see fluoride as a wonder drug or deadly chemical” (all emphases in the original):

Yet, as the Fluoride Action Network notes,

Despite this, many in the public health community continue to advocate for fluoridating water supplies. Unlike their predecessors, today’s advocates insist that fluoridated water provides an effective source of topical fluoride by increasing the fluoride content in both saliva and plaque. Even if true, however, recent studies show that there is virtually no practical difference in tooth decay rates between fluoridated and non-fluoridated areas. Accordingly, if fluoridated water does have a topical effect on teeth, it appears sufficiently miniscule that use of topical fluoride products can readily replace it.

It certainly doesn’t seem enough to justify the real, documented health risks of ingesting fluoride, from fluorosis to developmental problems to cancer.

There is also growing concern that we are getting too much of the stuff, which has lead the Department of Health and Human Services, among others, to recommend that EPA lower the levels allowed in water. Those who want fluoride are welcome to it and can easily get it through toothpastes and rinses. (Indeed, in some stores, it’s impossible to find toothpaste that does not contain fluoride – even “natural” products such as some varieties of Tom’s of Maine.)

Besides, there is a better way.

“The commendable goal of prevention,” says the International Academy of Biological Dentistry and Medicine,

should be advanced by effective routes, not by fluoride. When the public water supply is fluoridated, fluoride is taken into the body systemically when people drink water. Fluoride taken systemically has little to no effect in decreasing tooth decay.

As health professionals, we favor effective national and community efforts for cavity prevention; for example, a campaign for children to reduce sugar intake would have demonstrable effects on cavity reduction.

Fluoride just isn’t necessary for good dental health – but other things are. Proper nutrition and hygiene, for instance, are vital.Teeth need minerals such as calcium, magnesium and phosphorus ; vitamins such as D and K. They need to be cleaned regularly and well, not just with brushing but flossing, too. (Brushing alone cleans only about 60% of your total tooth surface.) They need to be spared added sugars and refined carbs, which serve mainly to feed the bacteria that form biofilm (plaque) and acidify the oral cavity.

Not only are such steps are more effective than fluoride, they have the bonus of contributing to whole body health, as well.